Home Featured Products The Next Bulleit Barrel-Aged Beer From The Guinness Open Gate Brewery In... 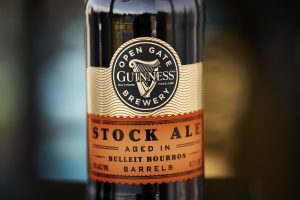 Ever since its gates officially opened in 2018, the Guinness Open Gate Brewery in Baltimore has made it clear that, in addition to brewing everything from IPAs to sours to stouts, a particular focus was going to be placed on barrel-aged beers. Continuing to make good on that promise, Guinness announces its second nationally available barrel-aged beer: Guinness Stock Ale Aged in Bulleit Bourbon Barrels . The announcement comes on International Stout Day – a holiday near and dear to the hearts of Guinness brewers in Baltimore and Dublin alike.

A stock ale is traditionally a blend of two different beer styles. Guinness Stock Ale Aged in Bulleit Bourbon Barrels is the endgame of a Guinness Barleywine and a Guinness Imperial Stout – both brewed in Baltimore and aged in Bulleit Bourbon barrels before being blended together. The high gravity stout and malty barleywine lead to a hearty and full-bodied beer with notes of nutty chocolate, raisins, roasted barley and sweet dark fruit with an ABV of 10%. Aromas of vanilla, coffee, stone fruit and ripe berries come off of this intense and luxuriant stock ale. The best way to enjoy all of these complex flavors and aromas is to sip the beer slowly and savor it at a leisurely pace – with respect to its double digit ABV.

“One of the really cool things about brewing a stock ale is that you actually get to brew two completely separate beers with unique traits and their own identities, and then blend them together to create a beer that takes on some of both, but also has a life of its own,” said Senior Brewer at the Guinness Open Gate Brewery in Baltimore, Sean Brennan. “When you consider all of the flavors coming from the wood of the barrels thanks to Bulleit’s subtle spice and oaky richness, there’s a lot of powerful influences to take note of and process in the final beer. As we say, it’s one to sip.”

Wooden barrels are a critical piece of Guinness history. During a span of nearly two centuries, every Guinness beer worldwide was stored and shipped in barrels. Fast forward to today; our brewers in both Baltimore and Dublin are bringing that tradition back to life, using their creativity to marry the best flavors of beer and wood.

Guinness Stock Ale Aged in Bulleit Bourbon Barrels goes on tap today at the Guinness Open Gate Brewery in Baltimore and can be found on shelves at specialty beer stores across the U.S. in 4-packs of 11.2oz bottles for a limited time beginning November 15th for a suggested retail price of $19.99. 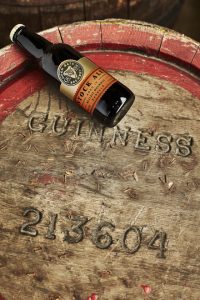 To keep up to date with the latest news from the Open Gate Brewery and Guinness, make sure to follow @GuinnessBreweryUS on Facebook and Instagram or visit www.GuinnessBreweryBaltimore.com and @GuinnessUS on Facebook, Instagram and Twitter. Guests of all ages are always welcome to visit the Guinness Open Gate Brewery Monday through Wednesday 3:00pm to 9:00pm, Thursday 3:00pm to 10:00pm, Friday 12:00pm to 10:00pm, Saturday 11:00am to 10:00pm and Sunday 11:00am to 9:00pm and enjoy a guided tour of the brewing facility.