Social Hour – the pioneering craft canned cocktail brand launched by two of the world’s most respected bartenders – has announced the launch of three new cocktail expressions.

Now offering a line of six creative cocktails, Social Hour was designed by cocktail-culture legend Julie Reiner (Clover Club, Leyenda) and Clover Club’s longtime Beverage Director, Tom Macy to make world-class cocktails available anytime, anywhere; whether at the beach, in a backyard, on a rooftop, or simply at home. 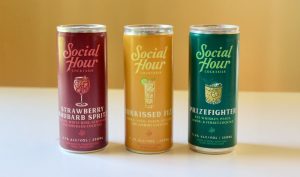 The new cocktails are inspired by some of the duo’s favorite recipes and include the Sunkissed Fizz (vodka, yuzu, peach, key lime, jasmine), the Strawberry Rhubarb Spritz (aperitivo, white wine, strawberry, rhubarb), and the Prizefighter (rye whiskey, peach, lemon and fernet). They join the award-winning Gin & Tonic, Whiskey Mule, and Pacific Spritz that quickly became fan favorites when the brand launched in July 2020.

With the new launch, Tom and Julie also reveal an all-new packaging design with eye-catching colors and beautiful illustrations to honor the cocktails they are inspired by. To signal the next chapter in the Social Hour story, the cans now feature a new, classic typeface colored in complementary, softer shades, as well as a new panel on the back of the can to highlight each cocktail ingredient and its provenance.

“With these new expressions we’re looking to take canned cocktails to the next level by moving beyond the classics and bringing in more creativity,” says Reiner. “We see Social Hour as a member of our family of bars, and we’re looking to provide the same cocktail experience, both in quality and creativity, that you’d expect from Clover Club or Leyanda. We want every aspect of the brand to reflect that, including the packaging”.

Social Hour’s new line continues to champion quality Brooklyn-made ingredients. In the same way that the original expressions spotlight New York Distilling Company’s Perry’s Tot Navy Strength Gin and Ragtime Rye, Tom and Julie have formed a relationship with Faccia Brutto spirits, also based in Brooklyn, using their Faccia Brutto Aperitivo in the new Strawberry Rhubarb Spritz and their Faccia Brutto Fernet Pianta in the Prizefighter. The duo have also built upon existing relationships with their go-to brands from other parts of the world including Tom’s favorite Massenez Crème de Pêche, a peach liqueur imported from Alsace, France.

“With so much activity in the canned beverage space, we felt the need to make Social Hour’s look and feel distinctly reminiscent of the cocktail bar experience, which is why we chose the bold, darker colors,” says Macy. “All of our new cocktails were inspired by cocktails that have appeared on previous menus, and we’re using the same ingredients in Social Hour that we’d reach for at Clover Club; real spirits, liqueurs and amari.”

Celebrating their next stage of growth with the addition of these new cocktails and all-new packaging design, Social Hour continues to simultaneously evolve the craft cocktail category while elevating the caliber of Ready To Drink cocktails available. The cans are available in New York wherever liquor is sold and for delivery in 38 states online through the Social Hour website in 4 packs for a suggested retail price of $20.