Founders Brewing Co. has announced that KBS Maple Mackinac Fudge will be the second variant to come from the brewery’s esteemed KBS brand. Founders pays tribute to the 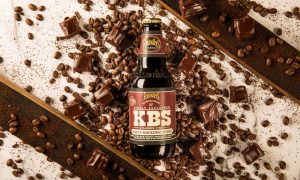 time-honored tradition of old-fashioned fudge-making with this new Barrel-Age release. By amplifying the rich chocolate notes of KBS using Mackinac Fudge coffee, then adding maple syrup and aging it in oak bourbon barrels, they’ve created a bold new take on their barrel-aged classic.

“We’ve been enjoying beers brewed with the Mackinac Fudge coffee in our taproom for years, and now we’re finally bringing that treatment to KBS,” said Brewmaster Jeremy Kosmicki. “It takes the chocolate flavor traditionally found in KBS to a whole new level. Add in a hint of maple syrup and now you have an elegant, yet explosive new flavor experience.”

KBS Maple Mackinac Fudge (11% ABV) will be available in 4-packs of 12oz bottles and on draft in the taprooms beginning on October 8. It will have a taproom retail price of $24/4-pack. Pricing outside of the taprooms will vary by market. It will ship out to the brewery’s entire distribution network in early October 2020; KBS Maple Mackinac Fudge will not be available in Mississippi.