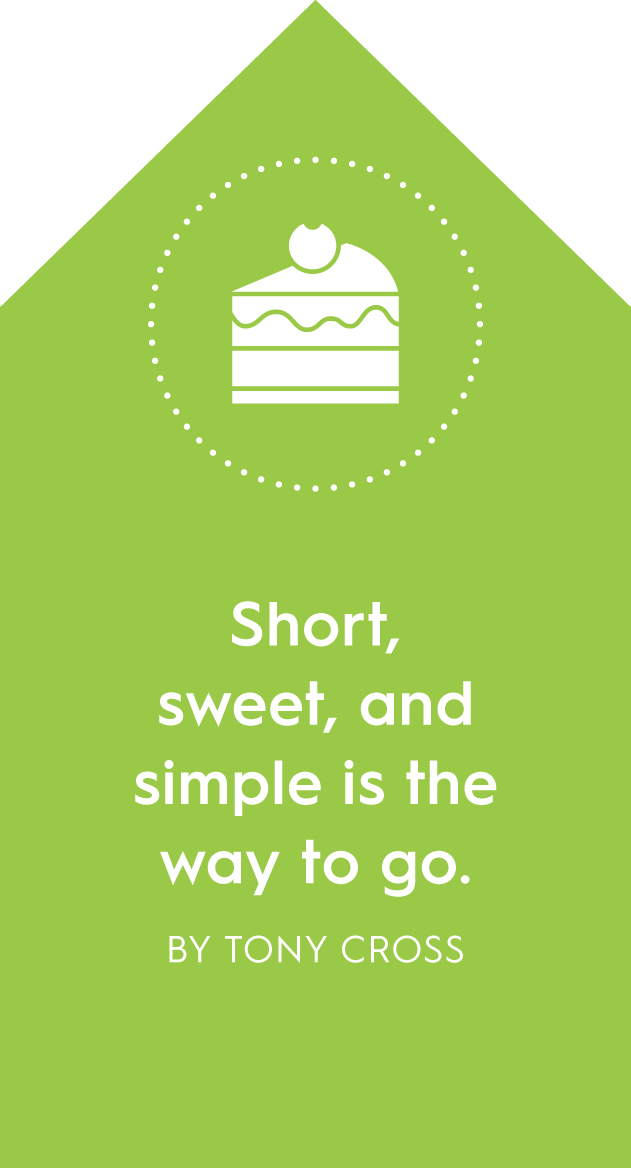 e’ve all been there. The server walks over to your table and drops off dessert menus after you and your friends have finished stuffing your faces. As your eyes peruse the yummy treats, they scroll down further to study the coffee and dessert drink menu. Sometimes these two are juxtaposed and sometimes they are interlaced. How many times have you seen a “Nutty Irishman” made with Frangelico, Bailey’s, and coffee? Or an “Irish Coffee” with Jameson’s Irish Whiskey, whipped cream, green crème de menthe, and coffee? Even worse, how about a “Chocolatini,” with probably a vanilla-flavored vodka and an ungodly amount of Godiva dark chocolate liqueur. Not a fan of the dark chocolate liqueur? Don’t worry, they’ve got you covered—a white chocolate liqueur. Yeah, that’s fair.

The problem here is these drinks are tired. Just like the myriad ‘tini menus that were everywhere at the turn of the twenty-first century, dessert drinks have badly needed a facelift.

Back before I got my turn behind the stick, I was a server, and I delivered a ton of these badly concocted sugar rushes to more guests than I can ever remember. Almost every delivery had the exact same result: as soon as the guest saw me coming with that oversized martini glass filled with eight ounces of corn-syrup, their faces would light up.
A cacophony of “ahhhs!” would fill the dining room and cause surrounding tables to smile and nod their heads as if they should probably order one next.

I myself even once fell victim to the sugary trap at the advice of a friend. I splurged, had two chocolate drinks, and felt terrible. I found out the next day that I almost gave myself diabetes.

Let’s fast-forward fifteen years. Here are a few cocktails that I feel have been part of the dessert cocktails revival. Try these drinks out, make substitutions, tinker with the recipes, and make them unique to your establishment.

But remember, just because these might land on the “Dessert Drinks” list of your menu, doesn’t mean that they don’t have to be balanced. Also keep in mind that you don’t need a lot of these to fill up the space on your menu; unlike your regular cocktail list that may have five to 15 selections, two to three offerings is perfectly fine when
it comes to these nightcaps.

A Riff on a Riff

A few years back, I was invited to a
pop-up dinner here in Southern Pines. A local, extremely talented chef had asked if I would like to do cocktail pairings with her four-course menu.
I was super excited! We were going to serve around thirty local business owners. Being in a small town, everyone invited knew each other well or were
at least acquaintances.

About two weeks before the event, Chef Jen gave me her menu. Everything looked fantastic. Immediately, I had ideas for the first three courses, but
I was at a loss for what to do for a pairing with her dessert. She was going to make a chocolate crème de pot with homemade vanilla ice cream. Off
the top of my head, I can’t remember the cream sauce that she garnished it with, but I know it was light, and the ingredients were sourced locally.
Easy enough, right?

I spent a couple of days going over what to do. I thought about doing some complicated chocolate-infused mezcal with yogurt and strawberries. And then it hit me—keep it simple, stupid.

Immediately, I remembered watching a video clip on YouTube of one of
my heroes, Jeffrey Morganthaler, explaining his Gin Alexander cocktail, which is equal parts London Dry Gin, crème de cacao, and heavy cream. I offered a drink special a few years prior when I used to run a restaurant bar, and the drink received accolades from our guests.

(Quick Side Note: This drink is a riff on the Brandy Alexander. If you’ve ever received a poorly made one, you’ll never forget it—i.e., huge martini glass with store bought vanilla ice cream, cheap brandy, and very bad crème de cacao. Gross.)

I riffed on Morganthaler’s recipe and came up with the Garam Alexander. Staying true to the original recipe, the only major change was substituting in equal parts of Flor de Caña 7 Year rum and a delicious local gin out of Winston-Salem, Sutler’s Spirit Co.
(a less juniper-forward gin with a heavier emphasis on citrus, cardamom, and other botanicals). The cocktail was served up in a small chilled coupe and garnished with a dusting of 100% organic cacao powder and garam masala, an Indian spice mix. I remember watching an episode of Chopped, and the guy who played “Christopher” on the The Sopranos series won the event because of his dessert dish—he dusted curry over his vanilla ice cream. Who knew?

I have some friends to thank for the introduction to this next drink.

Not too long ago, I was visiting Bo and Suze, a couple very dear to me. Not because every time I’m invited over I
get to try rare rums and mezcal, but it never hurts. While I was at Bo and Suze’s downstairs “Bo Zone” bar, Bo decided to cap the night off with a quick and easy recipe he found online. He whipped up three cocktails, strained them into vintage glass coupes, and smacked a handful of mint he placed atop for a garnish.

One sip, and I was hooked! Bo informed me that the cocktail was
The Noisy Cricket from Bartender Jim Romdall, who worked at the Seattle bar Vessel. From what I’ve read, the order that Romdall received was for a Fernet Grasshopper, but he swapped out the regular Fernet for Fernet Branca Menta, a less bitter, more minty little brother. The result is superb: the balance between sweet and bitter is right on the mark.

You’ll notice that The Noisy Cricket and the Garam Alexander cocktails both use Tempus Fugit Spirits’ Crème de Cacao a la Vanille—this is the real deal when it comes to a quality cacao liqueur. It’s made with Venezuelan cacao and Mexican vanilla beans—there is nothing artificial inside this bottle. 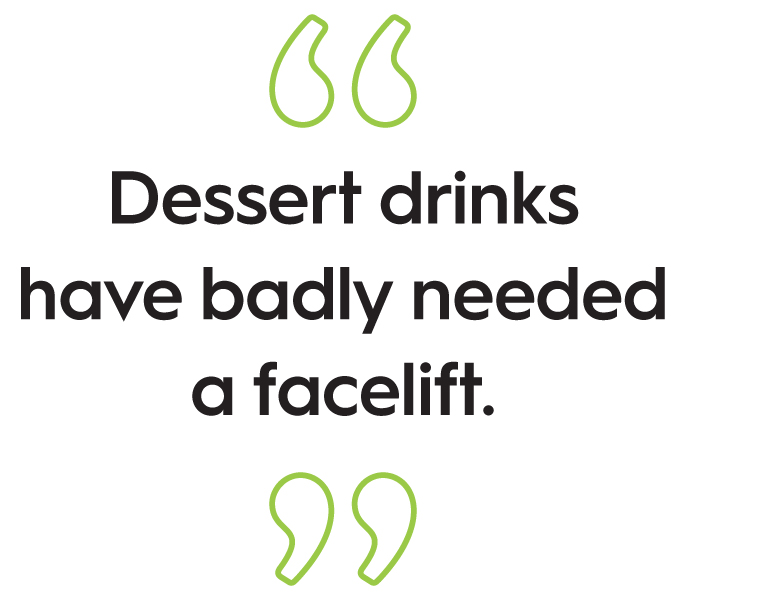 There are many people who are not interested in dessert cocktails. The same can be said for trying to sell a dessert after their meal. When this has been the case for me in the past, or when one of my servers would tell me that they have one guest that’s not participating in any type of after-dinner drink or meal, I would always recommend a cognac old-fashioned. On its own, cognac is a great after dinner drink. It’s a digestif, a drink taken after a meal to aid in digestion. With just a dash of sugar, bitters, water, and bourbon, we can turn this into more of a dessert sipper. I’ve also found that when one of these has been delivered to a group of guests, more orders of the same have followed.

Tony Cross runs cocktail catering company, Reverie Cocktails, which distributes kegs of carbonated cocktails
to bars, restaurants, and other venues.
For more information on his company or TONYC, his bottled tonic, email him at [email protected] or visit reveriecocktails.com. 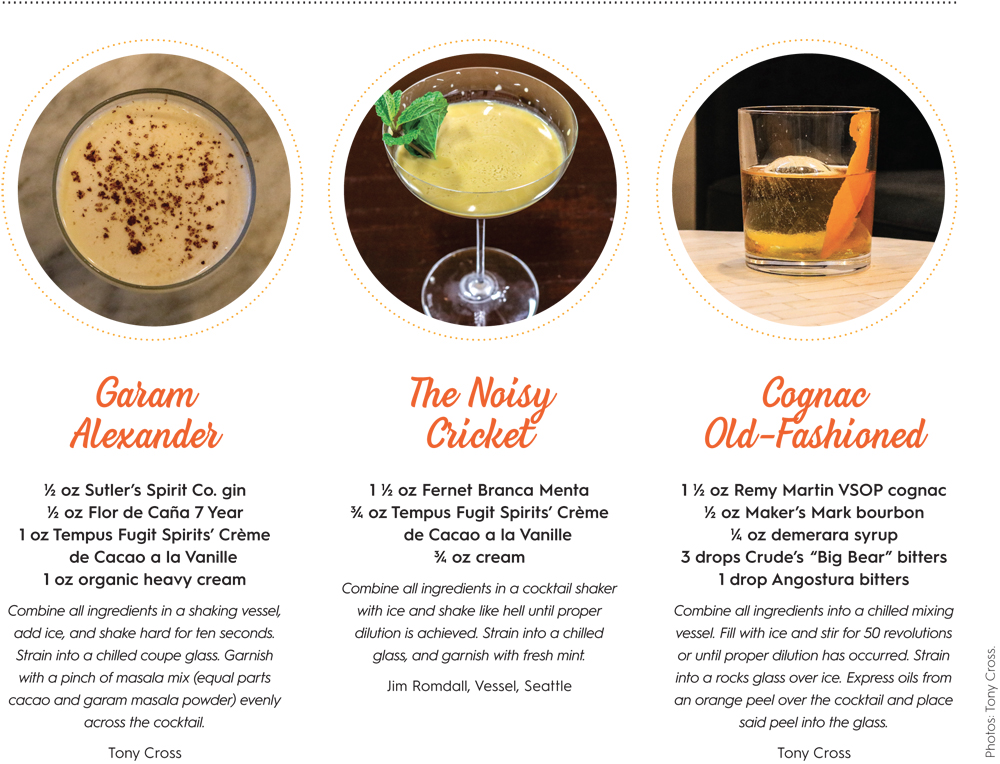