As the summer of 2020 draws to a close, New Holland Brewing Co. is releasing an updated throwback Dragon’s Milk Reserve bottling for nostalgic and fall-inspired enjoyment.

Available beginning in October, the final Reserve release of 2020 pairs Dragon’s Milk Bourbon Barrel-Aged Stout with ingredients that may be familiar to long-time fans: vanilla and chai spices, as a modernized throwback to the 2016 blend aptly named Vanilla Chai. The flavors blend into a rich medley that is equally at home in a glass by itself or served alongside dessert. 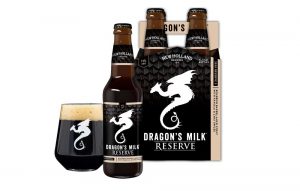 “Dragon’s Milk Reserve is a chance for our brewers to expand on their craft, and for our fans to seek out new tastes and pairings in an innovative way,” said New Holland Brewing Co. Head Brewer Darren Osborne. “Each entry into the Reserve series is carefully crafted
to highlight the signature flavors of roasted malt, vanilla, and oak in new and unique ways, becoming a legend all its own, and we think people will revel in the intense flavor imparted by hand selected ingredients.”

Dragon’s Milk Reserve: Bourbon Barrel-Aged Stout with Vanilla & Chai Spices will be available at select retail locations across the Dragon’s Milk distribution footprint, as well as on tap and for purchase in 4-pack 12-ounce bottles at New Holland’s pubs in Grand Rapids
and Holland, Michigan.

Throughout the ages, Dragon’s Milk has been a term used to describe potent ales and elixirs worthy of a celebration, a reward at the end of the journey. New Holland Brewing Co. is proud to continue that tradition today with the Dragon’s Milk family of brands. What began as a single barrel in the back of the brewhouse in 2001 has now become a line of legendary brews, including Dragon’s Milk Bourbon Barrel-Aged Stout, the best-selling American brewed stout.