Drifter Craft Cocktails announces the fourth flavor in their ready-to-drink (RTD) line that brings cultural drink traditions to the forefront: Nordic Style Gin & Tonic. The new canned cocktail celebrates aquavit, the national spirit of Sweden, Norway, and Denmark. The Nordic Style Gin & Tonic (7% ABV; SRP $19.99 for a 4-pack) will be available for purchase at select retailers, restaurants, and bars across the United States, and for nationwide shipping via DrifterCraftCocktails.com. 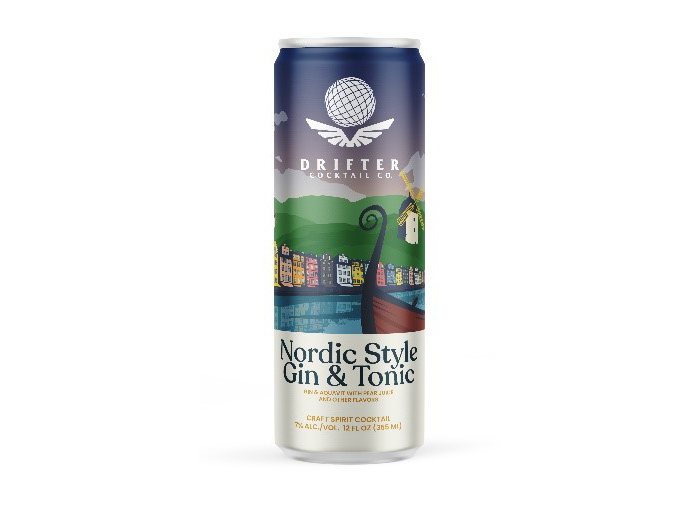 Drifter Craft Cocktails was created by the team behind Drifter Spirits, the company that brought Avuá Cachaça and Svöl Aquavit stateside. The introduction of the Nordic Style Gin & Tonic highlights another centuries-old spirit, aquavit, which has been produced in Scandinavia since the 15th century. The cocktail was formulated in partnership with Steva Casey who has tended bar around the world for 20 years, shaped countless cocktail menus with her artistry, and earned a reputation as the den mother of craft bartenders in Birmingham, Alabama.

Casey’s Nordic Style Gin & Tonic delivers a base of caraway and lemon peel from the Svöl Danish-Style Aquavit and is rounded out by several other botanicals from around the world including Icelandic angelica root and birch bark. Perry’s Tot Navy Strength Gin (produced by New York Distilling Company in Brooklyn, New York) adds sharp juniper with hints of citrus and coriander. Finally, pear juice from Guangdong, China and allspice sourced from Oxnard, California is added to complete the flavor experience.

“I was honored to collaborate with Drifter Craft Cocktails to develop a fresh take on the classic gin and tonic cocktail,” says Casey who is also behind the forthcoming Continental Drift bar in Birmingham, Alabama. “The delicate pear and warming allspice in this recipe offer a unique combination with aquavit which is not so different from your favorite gin – a spirit with distinct notes of herbs and botanicals. The Nordic Style Gin & Tonic is my ode to Southern and Nordic hospitality with new flavors for people to discover.”

“Drifter Craft Cocktails launched five months ago, and we’ve had an incredible response selling in to 22 states and shipping nationwide,” says co-founder Pete Nevenglosky. “Our bartender-created collection offers transparency on where we source ingredients and what goes into your glass. We look forward to expanding our collection with some of the most recognizable names in cocktails and bar culture.”