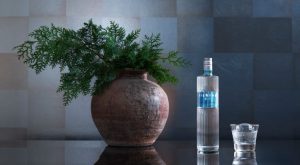 The pot-distilled spirit will be available at leading mixology-driven bars and restaurants, as well as notable independent spirits retailers (SRP $29.99/43% ABV/750ml). iichiko Saiten is launching in N.Y., Calif., N.J., Massa., Fla., Ga., Ill., Texas, Colo., Nev. and Wash. in early 2019. It is produced by Sanwa Shurui, Co., Ltd., one of Japan’s most esteemed producers of shochu, sake and wine. Davos Brands imports iichiko Saiten into the U.S. and is aligned nationally with Southern Glazer’s Wine and Spirits, the spirit’s U.S. distributor.

A Shochu Designed for Mixology

Shochu, a clear spirit distilled from barley, sweet potatoes, rice or buckwheat, is traditionally bottled at 25% ABV, since it is designed to complement Japanese cuisine, not overpower it. However, its lower proof has made it challenging for mixologists. In contrast, iichiko Saiten is 43% ABV and comparable in proof and cocktail versatility to Western spirits.

“We have created iichiko Saiten as a new kind of shochu specifically for mixology,” says Mr. Masahiko Shimoda, President, Sanwa Shurui, Co., Ltd. “Our goal is to make shochu a clear spirit that is celebrated around the world, on par with the best gins, vodkas, tequilas, rums, piscos and mezcals. Saiten brings a toasty and flavorful barley character that is truly unique and stands out in any cocktail. Moreover, we craft Saiten in keeping with iichiko’s highest quality standards for which we are renowned.”

“At 43% ABV, iichiko Saiten is a game-changer,” says Andrew Chrisomalis, CEO and Co-Founder, Davos Brands. “Japan has produced shochu for more than five hundred years, but from a mixological standpoint, this is Day 1, a remarkable watershed event. The cocktail possibilities for iichiko Saiten are limitless and we look forward to unlocking the creativity of the U.S. craft bartending community to harness its vast potential.”

On the nose, iichiko Saiten is redolent with aromas of honeydew melon, white grape, pickled watermelon rind and kabosu citrus. There are also hints of soy, white pepper and rich barley. On the palate, iichiko Saiten has a strong start and a long finish. It exudes rich umami notes of jasmine tea, white peach, minerals and earth with some citrus and a saline finish that beckons another sip.

The symphony of flavors creates exciting applications for iichiko Saiten’s use in cocktails, both stirred and shaken. These include the Manhattan, El Presidente, Blood & Sand and the Scofflaw, along with citrus-forward drinks.

A Shochu That Distills Kyushu’s Pristine Environment and Water

iichiko is headquartered in Kyushu, Japan’s southernmost of four main islands. A mountainous landscape with clean, fresh air, iichiko’s prefecture, Oita, is famous for its geothermal springs (onsen), dense cedar forests and pristine nature. iichiko’s spring water is exceptionally soft and pure. It is filtered through more than 10 layers of volcanic rock extending approximately 1,000 feet below ground, which contributes to iichiko Saiten’s smoothness.

The Art and Science of Koji, an Essential Aspect of Japanese Brewing

Koji is an essential aspect of Japan’s art of brewing. Leveraging their deep expertise in crafting sake, iichiko’s brewmasters have perfected the art and science of Koji, a sweet and fragrant mold that is generally inoculated into rice. Koji’s diastatic enzymes transform the grain’s starch into sugar, thereby setting the stage for fermentation, and give rise to robust flavors. iichiko’s unique strain of Koji is cultivated under laboratory-grade, clean room conditions. The Koji also creates citric acid, a natural preservative.

While rice Koji is typically used to make shochu, as well as sake, iichiko has broken new ground by cultivating barley Koji. This innovation truly sets the company’s shochus apart from other producers.

iichiko Saiten is made with hand-selected, two-row barley. As an ingredient, “shochu” grade barley is carefully selected from “malt” grade barley. “Shochu” grade barley has a character that maintains the integrity of its shape when polished. About 30 percent of the total weight of the barley’s kernel is removed through polishing, ensuring a clean and pure flavor.

Shochu production requires water, Koji, steamed barley and yeast, however, typically Koji only accounts for about a third of the mash. iichiko is one of a few producers to embrace the Zen Koji (all Koji) fermentation technique. In Zen Koji fermentation, barley Koji is used instead of steamed barley as a source of nutrition in the fermentation mash. Moreover, a proprietary yeast is introduced, whereby the aroma and flavor derived from the barley are enhanced, making for a richer, more robust and aromatic shochu.

Two Fermentations and a Single Distillation

Shochu fermentation consists of two steps, the first to encourage yeast production and the second to create alcohol, shochu aroma, and flavor. The Zen Koji technique is utilized in the second step. The process is painstakingly slow, yet potent, and results in a mash of approximately 18% ABV, around double the level common in whisky making. Because of the higher alcohol content, iichiko Saiten is distilled only once (single distillation style). The single distillation preserves various aromas and flavors derived from the barley in raw shochu. Therefore, iichiko is categorized as honkaku (genuine) shochu, and never contains artificial additives or sweeteners. Moreover, the single distillation better preserves the flavors created during fermentation, as opposed to multiple distillations that strip them out.