One of the few sweet spots of 2020 is back for a second time in the form of craft beer and cannolis! This February, Harpoon Brewery and Mike’s Pastry have partnered again to brew up their limited release beer – Harpoon Mike’s Pastry Cannoli Stout. The 7.3% ABV beer is made with Mike’s Pastry’s hand-made cannoli shells, cocoa nibs, lactose and vanilla, recreating the flavor profile of the famed dessert from Hanover Street. 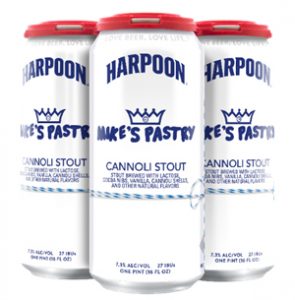 In addition to their original cannoli-inspired stout, Harpoon will be releasing a 9.0% ABV version of the beer that was aged in rye whiskey barrels to accentuate its creamy vanilla characteristics and provide notes of cinnamon, caramel, and rye spice. Both beers will be available in 16 oz. 4-packs starting on Tuesday, February 2nd, for a suggested retail price of $14.99 for the classic Cannoli Stout and $16.99 for the Barrel-Aged variant. Both can be found at Harpoon’s Boston and Vermont Beer Halls, at retailers across Massachusetts, and in select markets throughout the Northeast.

For every case of the beer sold, Harpoon will once again donate a portion of proceeds to Christmas in the City, a Boston-based local non-profit that provides financial support to families experiencing homelessness and poverty.