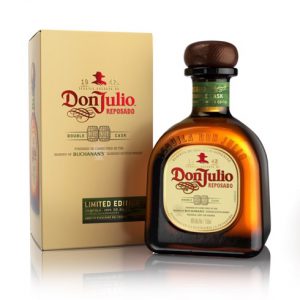 limited-edition Reposado tequila finished in casks used in the making of Buchanan’s Blended Scotch Whisky. Inspired by Don Julio González’s innovative spirit and passion to take the art of tequila making to new heights, current Master Distiller Enrique de Colsa is continuing the legacy by producing a truly unique tequila. The latest variant to the portfolio is a rich and nuanced expression of Tequila Don Julio’s traditional Reposado with hints of whisky on the finish.

Tequila Don Julio Reposado, Double Cask is first matured in American White Oak barrels for eight months as with Tequila Don Julio’s traditional Reposado. The tequila is then finished for 30 days in casks used in the making of Buchanan’s Blended Scotch Whisky. This unique aging process creates a distinctive flavor profile that is rich and complex.
Since Don Julio González revolutionized the tequila industry in 1942 when he began producing the spirit, the brand has always sought to deliver innovative offerings that are also representative of the quality that Tequila Don Julio has been known for. Master Distiller Enrique de Colsa, spent nearly three years perfecting this innovation, constantly experimenting with the vast cask options available within the Diageo portfolio. He landed on casks used in the making of Buchanan’s Blended Scotch Whisky since it provided a wonderfully complex, new flavor offering that still allows the notes of Tequila Don Julio’s signature Reposado to shine through.

Master Distiller Enrique de Colsa commented, “I spent three years experimenting with various cask options to perfect the flavor of this variant and I’m proud to introduce it to the U.S. I found that finishing the tequila for one month in casks used in the making of Buchanan’s Blended Scotch Whisky allowed me to create a tequila that perfectly balances the core flavor of Tequila Don Julio as well as the signature flavor of Buchanan’s Blended Scotch Whisky. It’s an incredibly unique flavor profile that is excellent enjoyed responsibly neat or on the rocks.”

As Tequila Don Julio continues to focus on providing innovative and ultra-premium variants for tequila enthusiasts, the brand will also introduce the Tequila Don Julio Reposado Private Cask program launching in the fall of 2018. As part of the program, 300 limited-edition barrels have been selected by Master Distiller Enrique de Colsa and aged for a total of 10 months, which is two more months than traditional Reposado and five times the base requirements for Reposado according to the Tequila Regulatory Council. Participating retailers can order a barrel to be sold in store, unique to each retailer and accompanied by a personalized certificate of authenticity from the brand.

Since Reposado was the first variant that Don Julio González distilled under his name, the Tequila Don Julio Reposado Private Cask program pays homage to the variant by providing tequila aficionados with a limited-edition aged Reposado, never before sold.
Tequila Don Julio Reposado, Double Cask will be available beginning Summer 2018 while supplies last. It has a suggested retail price of $59.99 and will be available at participating retailers nationwide. Private Cask will also be available at participating retailers around the country beginning Fall 2018 and more detail can be found on our website, www.DonJulio.com. The makers of Tequila Don Julio remind you to enjoy Don Julio in moderation and to drink responsibly.