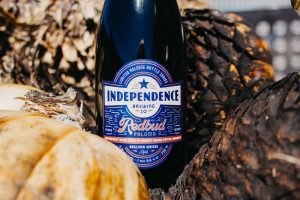 Redbud Paloma is a tart and lemony Berliner Weisse style kettle sour beer with 4.9% ABV. For this special brew, the Independence Brewing Co. team incorporated grapefruit juice and zest, and aged it in sotol barrels from Desert Door. The beer was then naturally bottle conditioned with a touch of agave syrup. Inspired by the classic Paloma cocktail, the result is complex and floral with a citrusy tang.

There are 200, 750 ml bottles available for pre-order and curbside pick-up at Independence Brewing Co. for $15 while supplies last. Orders can be made on the brewery’s website starting June 19 at 2 PM.

“Sotol was a new experience for me and after trying Desert Door for the first time, I knew that it was something I wanted to brew with,” said Head Brewer of Independence Brewing Co. Brannon Radicke. “When it comes to barrel-aged beer, most distilled agave spirits like mezcal and tequila can be challenging to work with because often their strong flavors and aromas can easily overwhelm the beer. What I found so promising about sotol is that it prizes subtlety, showcasing those earthy, botanical, and floral notes. I knew from the start that I wanted to use our Redbud Berliner Weisse which I felt would bring out and accentuate those floral notes and add a nice refreshing tartness. And after trying the Sotol Paloma at Desert Door’s tasting room, adding a bit of fresh grapefruit to the mix was a no brainer. I’m really proud of how this turned out, probably one of my favorite barrel-aging projects to date. The release came at just the right time too, I know I’ll be sipping this one all summer long.” 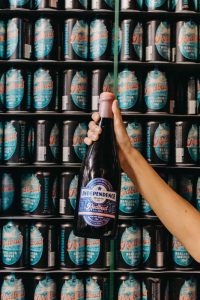 To celebrate this collaboration, Independence Brewing Co. will reopen its outdoor patio to the public by reservation from 4 p.m. to 9 p.m. on June 19, the day of the bottle release. Desert Door will be on site at the brewery both that Friday and Saturday during the reservation window, handing out samples of Desert Door sotol and a recipe card for their Indy x Desert Door Paloma beer cocktail made with Desert Door Original Sotol, Redbud Paloma, lime juice and agave.

The first 100 people who pick up their order between 4 p.m. to 9 p.m. on Friday and Saturday will receive all ingredients to make the Indy x Desert Door Paloma beer cocktail.