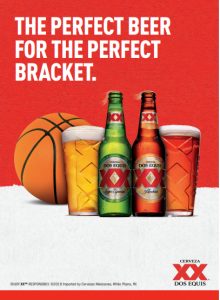 Dos Equis®, in partnership with Intersport, has announced the date and location of the third annual Dos Equis® 3X3U National Championship. The contest is a groundbreaking 3-on-3 college basketball tournament bringing together the country’s best collegiate seniors to compete one last time in Atlanta, GA, host city for college basketball’s national championship, April 3-5. The 3X3U tournament will be broadcast on ESPN2 and live streamed on Twitter. The field comprises 32 teams representing each Division I conference with 64 games played over three days and a prize pool totaling over $150,000. Retailers can leverage the action with a February-March multi-channel promotion featuring local activation, disruptive in-store merchandising, PR & media, and locally relevant influencers.

“We’re leveraging the energy and enthusiasm of college basketball’s peak moment to provide a broader platform for Dos Equis® and to drive store traffic to sell more of our products,” says Reggie Gustave, Dos Equis Brand Manager. “We’re strengthening our connection to college sports to reach younger Millennials who are highly engaged with their college teams during this cultural moment and crucial ‘Just Hanging Out’ consumption occasion,” continues Gustave. “Dos Equis® is the most interesting beer out there and is all about bringing more interesting things to our consumers. We will stand out from the crowd and interrupt the regularly scheduled championship with an interesting, exclusive and fast-paced tournament within THE tournament in Atlanta.”

The integrated retail activation around the 3X3U tournament includes a text-to-win sweepstakes for a chance at a VIP basketball experience in Atlanta and cross-merchandising partnerships to drive trail and loyalty. In a separate “Perfect Bracket” promotion, consumers can enter their bracket predictions on a Dos Equis® custom microsite where one Grand Prize winner will collect $2 million if they correctly predict the winners of all 63 games. Together, the promotions are aimed at engaging consumers in unparalleled basketball action and strengthening the Dos Equis® commitment to college basketball.

From gut wrenching wins to heartbreaking losses, March is the month for thrills. College basketball fans and non-fans alike cannot wait for the national championship to start and Dos Equis® is right there with them. In a February-March multi-channel promotion the fast-growing Mexican import is delivering added excitement by raising the stakes on competitive fun and asking consumers to enter their brackets for a shot at the ultimate prize of $2 million.

“In a full-court press in the run-up to the national championship match ups, we’re encouraging beer drinkers to enter our unprecedented bracket sweepstakes and stay engaged with Dos Equis® all month long,” says Reggie Gustave, Dos Equis Brand Manager. “Consumers can enter their bracket predictions on our custom microsite where one Grand Prize winner will collect $2 million if they correctly predict the winners of all 63 games. Since Dos Equis® consumers are more likely than average to watch Men’s Basketball on TV[1], we’re reinforcing the notion that Dos Equis® is the best option for basketball viewing,” continues Gustave. “This promotion –‘The Perfect Beer for the Perfect Bracket’– is aimed at engaging consumers in an exciting sweepstakes and helping retailers drive sales and profits through display and high-impact merchandising.”

Dos Equis® and basketball are a natural match up. College basketball fans over-index at 152 for drinking Dos Equis®[2], 64% of Dos Equis® drinkers are fans of college sports2 and 78% of Americans consume alcohol while watching basketball[3].

To further its commitment to college basketball, Dos Equis, in partnership with Intersport, is sponsoring the 3X3U National Championship, a three-day tournament featuring college basketball players vying for a $150K prize. The first-of-its-kind tournament –held in Atlanta, GA April 3-5 leading up to the culmination of the national championship– will be broadcast on ESPN2, live streamed on Twitter and feature integrated retail activation.