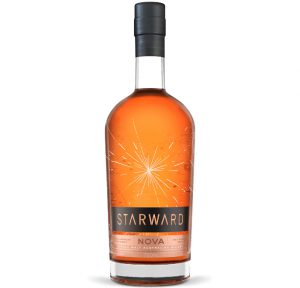 Nova is a unique whisky which draws influence from the vibrancy of “big red” wines from southeastern Australia. The distillery team sources barrels from local wineries that previously held Shiraz, Cabernet Sauvignon and Pinot Noir. This proximity allows the team to maximize the flavor of the wine permeated into the oak, lending a vibrant red ochre color to the final liquid. The full maturation in red wine barrels creates a light and fruity whisky with a long and spicy finish, similar to some of the country’s award-winning wines.

Starward utilizes the dynamic temperatures for which Melbourne is famous to accelerate the whisky maturation process in an approach known as Elemental Maturation or more colloquially “a Melbourne year”. The result is a long, distinct and spicy finish that creates a complex single malt from a relatively young whisky.

David Vitale founded the distillery in 2007 in his hometown of Melbourne. After working as business manager of a prominent Tasmanian distillery for several years, Vitale wanted to make an accessible whisky that was representative of Melbourne’s cosmopolitan character. His passion for food, wine and beer led to Starward’s original purpose of being an easy drinking whisky designed to pair well with food.

“Starward began with a simple vision: to make a distinctly Australian whisky we could offer the world with pride,” said David Vitale, Founder of Starward Whisky. “I have long dreamed of being able to share our whisky in the U.S. It is a genuinely exciting time for the team as we take the next step on our Starward-bound journey.”

Starward Nova has an ABV of 41% and is available nationally for the suggested retail price of $55 per 750ml bottle.