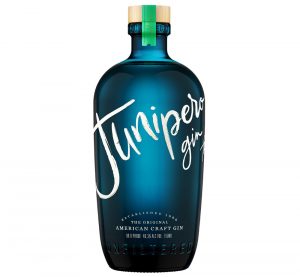 The first of its kind, Junipero Gin (49.3% ABV; $34.99 SRP) fearlessly led the birth of American craft gin in 1996. Driven to elevate juniper and citrus flavors, the San Francisco-based distilling team at the Hotaling & Co. distillery in the city’s Potrero Hill forged a new path by crafting each batch of Junipero in a small copper pot still, scouring the globe for the most expressive botanicals, and bottling at a bold, unfiltered 98.6 proof. Today, Junipero once again breaks the mold of tradition and introduces a bold new look that matches its pioneering spirit, and challenges gin lovers to live with the mantra: “More Firsts. Less Fear.”

“As the original American craft gin, Junipero needed to convey a daring attitude,” says Dan Leese, President and CEO of Hotaling & Co., Junipero Gin owner and producer. “Radical thinking gave it life, and the new packaging reflects that brave spirit with a powerful dark-colored glass and a distinctive script wrapped around the bottle. And with the call to action for ‘More Firsts, Less Fear,’ we seek to celebrate individuality and iconic spirit itself.”

Developed by award-winning packaging and branding design company, Stranger & Stranger, the new Junipero Gin look is inspired by the brand’s fearless origins and convention-breaking DNA – a nod to the distillers who first created Junipero long before craft gin was ubiquitous – and takes its aesthetic cues from expressive public art. The handwritten paint-like script logo will appear throughout the new Junipero campaign, which will roll out across social channels, product packaging, point-of-sale materials, and event signage. The organic shaped juniper berry-blue bottle will stand out on any backbar or bar cart.

An additional brand icon, found on top of the bottle and shipper, celebrates Junipero’s origins and higher ABV as “San Francisco Strength” alongside an image of botanicals gripped in a fist, reinforcing the brand’s strong, independent attitude.

AROMA: Strong juniper core; crisp and clean with bright citrus notes and herbal complexity
PALATE: Big structure with juniper at the forefront that opens up and reveals its bold personality in the ﬁnish with notes of lemon peel, cardamom and lemongrass

After 24 years, Junipero Gin continues to receive multiple awards for its uncompromising bold juniper-forward flavor that stands up in any gin cocktail. The most recent accolades include:

The new Junipero Gin will be distributed in California exclusively in 2020, expanding to Florida, Georgia, Illinois, Massachusetts, New Jersey, New York, and Texas in 2021.