Sweet Amber Distilling Co. announces the release of BLACKENED® American Whiskey’s
Batch 100. Batch 100 will be available exclusively in a limited-edition box set commemorating the benchmark expression of the gold medal award-winning whiskey from Metallica. The box set also includes two 12-inch vinyl picture discs of the custom Metallica playlist used in the finishing process of the whiskey, as well as the first edition of the BLACKENED Zine – all available only as part of this collector’s edition. 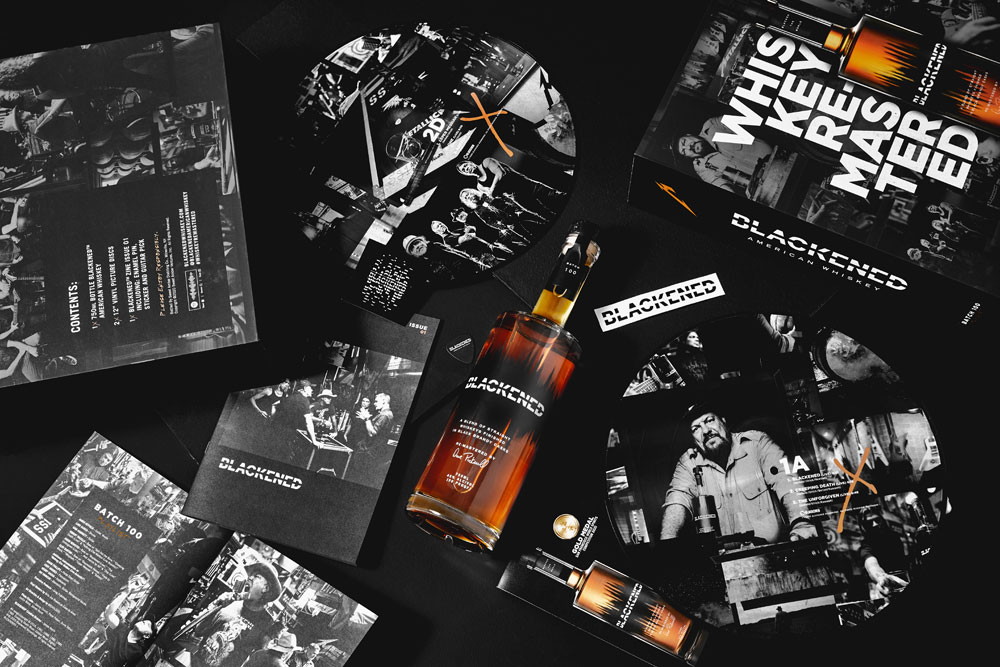 BLACKENED, a blend of North America’s finest bourbons and ryes, was launched by Metallica and the legendary Master Distiller Dave Pickerell with Batch 81 in 2018 to honor the year the band was founded. In June of 2019, Master Distiller & Blender Rob Dietrich joined the fold after the passing of Pickerell, overseeing the sourcing, blending and cask finishing of barrels for each batch.

BLACKENED uses Metallica’s music to literally shape the whiskey. Using a proprietary sonic-enhancement process dubbed BLACK NOISE, the low hertz vibrations of the music pummel the black brandy casks during the finishing process, agitating the whiskey and extracting more flavor from the wood. Each batch of BLACKENED has a unique playlist curated by the band members themselves. The Batch 100 Playlist is a special collaboration with music selected by the brand’s very own Master Distiller & Blender Rob Dietrich and curated by Metallica co-founder Lars Ulrich, which resulted in an eclectic mix of rare, live and studio recordings from various albums across the band’s incomparable career.

The first issue of the BLACKENED Zine will also be included exclusively in the box set, making this a must-have for die-hard fans and collectors. The zine brings fans into the belly of the beast that is the Batch 100 playlist, with personal commentary from Lars Ulrich and Rob Dietrich, delving into the masterful collaboration behind the whiskey. Also included is iconic imagery of the band and Dietrich captured by legendary photographer Danny Clinch, with behind-the-scenes glimpses of Metallica’s HQ and rehearsal space.

Dietrich approached the playlist for Batch 100 on both a technical and deeply personal level. “I wanted to add live versions to show the connection of the fans to the music, to the band, and to the whiskey,” said Dietrich. “‘Nothing Else Matters’ is an acoustic version from the band’s first Helping Hands Benefit Show that James (Hetfield – Metallica co-founder, guitarist and vocalist) verbally dedicated to BLACKENED’s founding Master Distiller, Dave Pickerell just days after his passing.‘One’ is a song we listened to over and over again when I was deployed to Somalia during Operation Restore Hope and Operation Continue Hope. It was one of our anthems, and the energy of the crowd in this live version is incredible.”

With a professional background in both distilling and music, Dietrich brings his own unique talents and skills to the role with Batch 100.

“I am honored to have the opportunity to be able to create a whiskey and pour so much of myself personally into the process,” says Dietrich. “Music and distilling are two things I have dedicated my life to, and I do not take for granted how rare it is to be able to blend, literally, these worlds.“

“When I look at Rob’s playlist, I love the selections. I love the variety and I love that he’s gone for two deeper live tracks from the Damaged Justice tour,” says Metallica’s Lars Ulrich. “I love seeing both the Binge & Purge and Through the Never eras represented. And he even tapped the Helping Hands album, so it’s clear he is not a part-timer!”

Side B
1. Disposable Heroes
2. Fade to Black
3. Spit Out the Bone

Side C
1. Whiplash
2. …And Justice for All
3. Nothing Else Matters (Live Acoustic)

black brandy barrels, the liquid is bathed in low hertz sound waves so intense that it actually intensifies the molecular interaction of the whiskey with the wood and, ultimately, the finish. Being thrashed by the Black Noise sonic enhancement process helps
give the spirit a warm, honey-amber hue. Burnt caramel, oak and honey are present on the nose and moderate hints of spice upon first sip. The flavor of BLACKENED® builds with notes of honey, cinnamon, allspice, clove and mint, with unexpected hints of apricot lingering underneath. Expect a long and smooth finish with slightly creamy hints of butterscotch taffy, maple and honey.

BLACKENED® American Whiskey Batch 100 is available in this exclusive box set, under license to Cask Cartel and Spirited Gifts, with an SRP of $149.99.