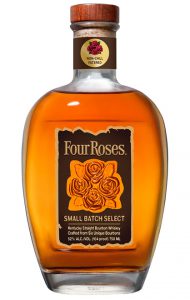 Non-chill filtered and bottled at a 104 proof, Small Batch Select will launch this spring in Kentucky, New York, California, Texas and Georgia. It will be available in additional locations in the future.

“We wanted to add something to our lineup that brings that pure experience you get with a non-chill filtered Bourbon, while also showcasing some of our recipes and flavors that aren’t as forward facing in our other existing bottles,” said Master Distiller Brent Elliott.

While details of which Bourbon recipes Elliott selected for Small Batch Select will be announced this spring, Elliott said each will be a six and seven-year-old Bourbon.

On the nose, Four Roses Small Batch Select offers raspberries, clove and nutmeg. As it hits the palate, it opens into flavors of apricot, ripe berries, vanilla and light oak. The finish lingers with notes of spearmint and a touch of cinnamon.

“Small Batch Select certainly can be one of your special occasion Bourbons, but we want it to be more accessible so you don’t hesitate to open up that bottle and enjoy it any time,” Elliott said. “I am particularly proud of this Bourbon, as it is the biggest addition to the storied history of Four Roses since I became Master Distiller.”