Home Behind The Bar Beer Shmaltz Brewing Celebrates the 30th Anniversary of Star Trek: The Next Generation... 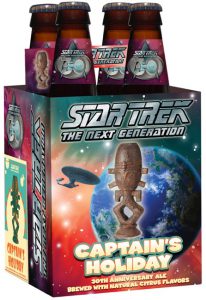 Just in time for the upcoming holiday season, Shmaltz Brewing Company nationally releases a new Collector’s Edition beer commemorating the 30th Anniversary of Star Trek: The Next Generation. 2017 marks 30 years since Star Trek: The Next Generation premiered in September 1987, and Shmaltz Brewing follows its summer release of Star Trek Symbiosis® with the latest tropical getaway that’s brewed with orange peel and lime, Star Trek Captain’s Holiday®. CBS Studios has teamed up with Shmaltz for the only officially licensed Star Trek beers in the United States.

In 2016, Shmaltz debuted two critically acclaimed Star Trek Golden Anniversary Ales to celebrate the 50th Anniversary of the iconic franchise. 2017 brings triple the excitement with the limited release of three Star Trek specialty beers rolling out throughout the year. Under license by CBS Consumer Products, the first extraterrestrial elixir of 2017 was Star Trek Klingon Imperial Porter® (7.3% ABV). Star Trek Symbiosis® launched at Comic-Con International in July 2017. This week, Star Trek Captain’s Holiday® transports itself in 4-packs to retail outlets in 35 states across the country and will be on draft at select bars.

Star Trek: The Next Generation 30th Anniversary Ale — Captain’s Holiday
You don’t have to be a Starfleet Captain or negotiate a difficult trade agreement between the Gemarians and the Dachlyds to deserve a little rest and relaxation. In the Star Trek: The Next Generation episode “Captain’s Holiday,” the crew convinces Captain Picard to take a much-needed vacation on the pleasure planet Risa. Number One (Commander Riker) tricks the Captain into buying a small statue called a Horga’hn when he arrives. After being accosted by a steady stream of women, he is told that displaying the statue in public suggests he is seeking Jamaharon. Whether for Jamaharon or simpler moments of pleasure, Shmaltz’s tropical getaway should be perfect for kicking back and escaping the stresses of everyday life here on Earth.