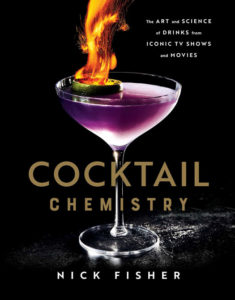 Released on May 17, the book is a guide to creating the perfect cocktail, and it offers an introduction to essential bar tools and glassware as well as a primer on the sweet, sour, bitter, and salty flavor profiles of a cocktail. Cocktail Chemistry also teaches techniques to increase your finesse when mixing, like how to make perfectly clear ice and how to flame a citrus peel.

While Fisher knows it’s important to put in the work of learning the craft of mixology, he also understands that, fundamentally, it’s supposed to be fun. In that spirit, Fisher recreates iconic drinks from pop culture (think James Bond’s Vesper Martini, Don Draper’s Old Fashioned from Mad Men, and Fight Milk from It’s Always Sunny in Philadelphia) and uses them as the point of reference to expand and explore related recipes and techniques.

Check out some recipes excerpted from the book below!

THE FOLLOWING RECIPES AND TEXT ARE EXCERPTED FROM COCKTAIL CHEMISTRY: THE ART AND SCIENCE OF DRINKS FROM ICONIC TV SHOWS AND MOVIES. COPYRIGHT © 2022 COCKTAIL CHEMISTRY, LLC. PHOTOGRAPHY BY AUBRIE PICK. REPRODUCED BY PERMISSION OF SIMON ELEMENT, AN IMPRINT OF SIMON AND SCHUSTER. ALL RIGHTS RESERVED.

From Nick Fisher: “The TV show Twin Peaks ran for two seasons back in the early 1990s. It 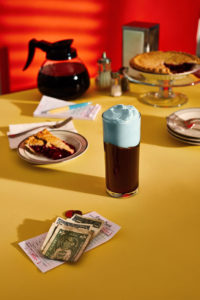 was classic David Lynch surrealism and, frankly, it’s not my cup of tequila. But when it returned for a third season in 2017, it was the perfect opportunity to recreate a highly requested, blue- foamed cocktail from season two called the Black Yukon Sucker Punch. For the full Twin Peaks experience, I partnered up with Andrew Rea from the excellent YouTube channel Binging with Babish to pair this drink with the TV show’s signature pancakes.”

Directions:
For the blue foam, in a large bowl, beat the egg whites with an electric mixer on medium speed (or by hand) until stiff peaks form. Mix in the sugar just until combined. Set aside. In a separate large bowl, whip the cream with an electric mixer on medium-high speed (or by hand) until stiff peaks form. Add the vanilla extract, salt, and 2 ounces of the blue Curaçao. Mix together on low speed until just combined, then mix in the remaining 2 ounces blue Curaçao. Fold in the egg whites. Use right away or store in an airtight container in the fridge until ready to use, up to three days. Makes enough for 10 drinks.

For the cocktail, add the whiskey and coffee to a heatproof Collins glass. Float the foam on top, slowly pouring it over the back of a spoon. Serve right away.

A Song of Ice and Fire (Inspired by Game of Thrones) 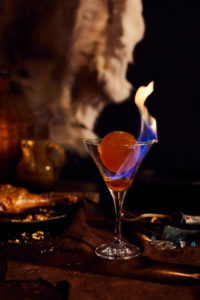 From Nick Fisher: “The first video on my YouTube channel featured an ice ball cocktail. It’s a ridiculous but fun trick that involves creating a spherical ice shell, injecting a cocktail inside that shell, and then smashing it open. I explain how to make the ice ball shell in the next section (see Ice Ball Shell on page 149), but this demo spawned several ice ball experiments—some involving fire, smoke, and color-changing drinks. This Song of Ice and Fire (named after the book series that was later adapted into the TV show Game of Thrones) is probably the most insane cocktail I’ve created. It never actually appears in the series, but at the peak of the show’s popularity I wanted to invent a cocktail involving ice and fire. Instead of smashing the shell open here, I skewer the ice ball cocktail to balance it over flaming rum in a martini glass. The flame melts the bottom of the ice ball, slowly releasing the cocktail. Make sure to use a skewer that’s long enough to balance the ice ball on the rim of your martini glass.

A note of caution: Always be careful when combining fire and cocktails. Especially for this drink, where a cold cocktail is suddenly introduced to a flaming spirit and there is a risk of thermal shock that could shatter the glass. Only use tempered glasses to make this drink.”

Directions:
Using a pointy end of a paper clip, pierce a tiny hole in the ice ball shell a little bit above its equator. Insert a 4.5-inch bamboo skewer in that hole until it reaches the opposite side of the ice ball shell. Pierce another tiny hole in the shell where it meets the end of the skewer and push the skewer through. Balance the skewered ice ball on the rim of a freezer-safe rocks glass. There will probably be a gap in the shell where the skewer emerged, so add a few drops of water to the gap and transfer to the freezer to patch it up.  Add the 151-proof rum to a tempered martini glass. Combine the 80-proof rum, Cointreau, lime juice, simple syrup, orange juice, and bitters in a shaker tin with ice. Shake until very cold. Using a marinade injector, inject the cocktail into the hole at the top of your prepared ice ball shell until it fills the shell completely. Carefully ignite the 151-proof rum. Holding the ends of the skewer, carefully transfer the ice ball cocktail to the martini glass, centering it over the flame and balancing the skewer on the rim of the glass. The flame will slowly start to melt the bottom of the ice ball, allowing the cocktail to pour out and extinguish the flame. Remove the shell to sip the cocktail.

From Nick Fisher: “The Mandalorian is a space western series in the Star Wars franchise 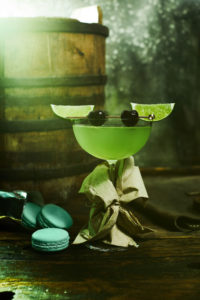 that debuted in 2019 and follows a bounty hunter on the lam after being sent to retrieve “the Child.” This little creature is of the same species as Yoda, and the world collectively became obsessed with “Baby Yoda.” Baby Yoda memes spread like wildfire, knockoff merch sold on the black market, and even cocktail culture couldn’t escape the trend.

The so-called Baby Yoda cocktail that made the internet rounds was in fact just a cute and clever way to dress up a coupe glass like Baby Yoda, and it was first created at the Laka Lono Rum Club in Nebraska. The only requirement for the beverage is, of course, that it be green, so for my version I went with the Last Word, arguably the greatest equal parts cocktail ever created (Negroni fans, calm down). I dubbed this “Baby Yoda’s First Word,” and after we make this adorable drink I’ll explore some of my favorite variations on the Last Word template.”

Directions:
Drape the napkin around the stem of a chilled coupe and secure with the twine to create Baby Yoda’s robe. Add the gin, Chartreuse, maraschino liqueur, and lime juice to a shaker tin with ice. Shake for 15 seconds. Double strain (pour through a Hawthorne strainer over a fine-mesh strainer) into the prepared glass. Cut a slit in the rind of each lime wedge and prop them slit side down on the rim of the glass to create Baby Yoda’s ears. Balance the cocktail pick on the rim of the glass, lining up the cherries to create the eyes. Serve. 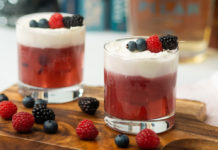 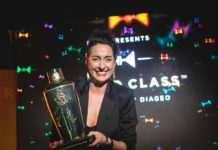 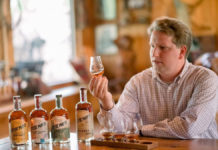