The 100th National Restaurant Association Restaurant, Hotel-Motel Show® was held at Chicago’s McCormick Place from May 18-21. For the fifth year-in-a-row, the Show had 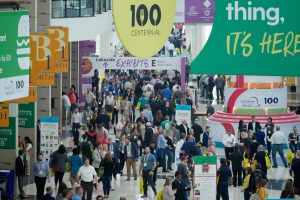 “The centennial Show was a success by every measure,” said Mary Pat Heftman, President, Restaurant Show Group at Winsight, the Show’s producer. “Besides the record exhibit sales and strong attendance growth, the energy on the Show floor was palpable. Education sessions were standing room only, there were delicious new foods at every turn, and once again, ingenuity was on display everywhere you looked.”

“The Show added a number of features to inform and inspire attendees in the 100th anniversary year,” said Heftman. “From the new Sysco Culinary Experience Center, to the new Digital Media Slam, the new Women Leaders Panel led by the James Beard Foundation, the new Technomic Ask the Experts sessions, and even a new butchery demonstration, there was truly something for everyone.”

“We bring staff from QA, purchasing, franchise development, operations, IT and other critical departments. Our franchisees come, too,” said Scott Redler, Co-Founder and COO of Freddy’s Frozen Custard & Steakburgers and Co-Chair of the 2019 Show. “This is an important show for the continued growth of our business. Not only do we get the continuing educational opportunities and exposure to products and services to help us grow, it’s a time for our team to get away from the day-to-day and think about how to further our success. I was a co-chair because I believe in the value and power of this Show.”

A Show favorite was the 23-feet high birthday cake in the middle of McCormick Place’s Grand Concourse. “The Show takes its celebrations seriously,” said Mike Hickey, Executive Vice President and President, Ecolab Inc.and 2019 Co-Chair of the National Restaurant Association Show. Eli’s Cheesecake created a 1,200 pound cheesecake that was cut in a 100thanniversary ceremony that included Ted Balestreri, Chairman & CEO of the Cannery Row Company and the 100th Anniversary Chairman, Illinois Lieutenant Governor Julianna Stratton, Dawn Sweeney, President & CEO of the National Restaurant Association, Mike Wood, CEO of Winsight and Mary Pat Heftman. “We’re so grateful that Eli’s was able to create a dessert equal to the magnitude of a 100thanniversary,” said Hickey. “The crowd at the celebration loved every last piece.”

A highlight of this year’s Show was the annual Signature session, which included senior leaders from various segments across the foodservice industry. Moderated by Sweeney, the panel included Chris Gheysens, President & CEO, Wawa; Tim McEnery, Founder & CEO, Cooper’s Hawk Winery & Restaurants; Randy Edeker, Chairman, CEO & President, Hy-vee, and John Cywinski, President, Applebee’s Bar & Grill. The discussion was about the future of dining — where, what and when consumers will eat in the next 5-10 years. “We all compete for share of stomach,” said Cywinski, summing up the thoughts of the c-store, grocery and restaurant panelists represented on stage. Edeker recalled a recent customer encounter – “I want you to be what I want when I need you,” said the woman. “If you’re not, I’ll go somewhere else.” All of the panelists agreed that addressing the needs of consumers like this is critical to remain competitive.

Heftman made an exciting announcement on the first day of the Show – the 2020 Show will include a fourth exhibit hall. “The demand this year exceeded the available exhibit space. We were “wall-bound.” In order to accommodate the many exhibitors that want to join the Show, and allow for booth expansion among current exhibitors, we simply need more space,” said Heftman. “Adding more space and exhibitors also lets us bring to operators, more innovations and game-changing ideas than ever before.”

“The Show was everything we hoped and more,” said Christine Schindler, CEO & Co-Founder of PathSpot Technologies. “PathSpot is a new restaurant tech startup and this was our very first Show. We filled four fish bowls with leads and now our whole team is focused on following up. Every new industry supplier needs to be here if they want to meet the right people.”

“It’s so inspiring to see entrepreneurs like Christine, who developed her first product in her tiny NY apartment, in the same marketplace as industry heavyweights like Sysco, Welbilt, and so many others. This Show is about building business whether your sales are in the billions or your headquarters are in your living room and your dog is your receptionist,” said Heftman, with a laugh.

Over 100 countries and all 50 states were represented at the 100th anniversary event. “We saw attendee growth from the three largest US states, California, Texas, and Florida, and from the local region too, with Illinois, Wisconsin, Michigan, Iowa and Indiana all showing positive gains,” said Heftman. “We also saw growth from all corners of the map including key markets such as China, Japan, Colombia and others. Growth like this comes from keeping the Show fresh every year, but more importantly, keeping our focus on helping operators of all sizes grow their business and driving profitability.

Thousands of restaurant operators, from the #1 brand down to the local pizza parlor, along with representatives from the top dealer/distributor, contract management organizations, filled this year’s Show. The Show’s attendance included:

As the dynamics in the industry change daily, the Show also saw growth in professionals from the retail foodservice segment (+3%) and the lodging sector (+13%). These segments were represented by some of the world’s largest brands including Whole Foods, Walmart, Hy-Vee, Roundy’s, Amazon, Target, Kroger, Wawa, Costco, Hilton, Hyatt, Marriott and many others. 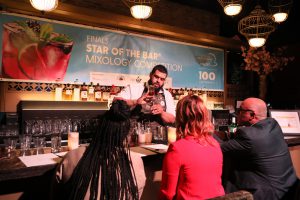 In addition to a full schedule of business-building activity, attendees loosened their ties and put on their party clothes for the 100th Anniversary Celebration and Star of the Bar Finals competition. The 2019 Star of the Bar finals event took place at TAO on Monday, May 20th, in conjunction with the National Restaurant Association Show’s 100th Anniversary Celebration event. 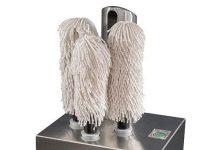 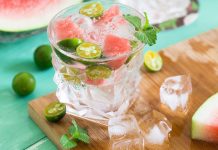 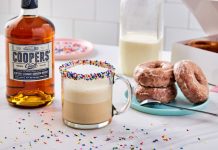