Anchor Brewing Company announces the release of its 2018 Christmas Ale, a subtly spiced 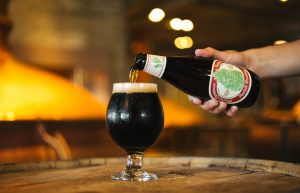 Back in 1975, Anchor released the first holiday beer in America since Prohibition. Year after year, Anchor creates a new, secret recipe with a unique hand drawn label for their Christmas Ale, but the intent with each brew remains the same: joy for the changing seasons and celebration of the newness of life. With a heavily guarded, confidential recipe, Christmas Ale (6.9% ABV) is sold only from early November to mid-January. This highly anticipated seasonal delight is complex and full in flavor, packed with toasty cocoa notes, roasted malts and strong aromas of resinous pine.

“Each year, we bring something new and interesting to this traditional holiday beer while maintaining its signature style,” said Anchor Brewmaster, Scott Ungermann. “Our 2018 Christmas Ale has varying specialty malts, lending rich flavors of brûléed sugars, holiday spices and freshly baked banana bread with a velvety finish. The aromatics are quintessential for the holiday season: nutty candied yams and resinous pine. It pours a nice mahogany brown color with a fluffy, tan head.”

As each Christmas Ale recipe evolves, so does its hand drawn packaging, created by long-time Anchor Illustrator Jim Stitt, who has been creating Anchor’s Christmas Ale labels since 1975. Since ancient times, trees have symbolized the winter solstice when the earth, with its seasons, appears born anew. For the 2018 release, Stitt created a brimming Korean Pine Tree for the label. Native to both North and South Korea, the Korean Pine Tree is a symbol of peace and a reminder of the spirit of the season. It flourishes in the picturesque botanical gardens just north of San Francisco, Anchor’s home base.

A beloved tradition for many Anchor fans is to collect multiple years of Christmas Ale. The beer’s wintry spiced flavors evolve over time, making vertical tastings an interesting and tasty holiday activity. With longevity in mind, the Anchor brewers increased the ABV in Christmas Ale to 6.9% this year. “People love to try our Christmas Ale year upon year in vertical tastings,” said Ungermann. “It’s important that this tradition can age gracefully for years to come.” The beer should be stored in a dark and cool place for the best results. 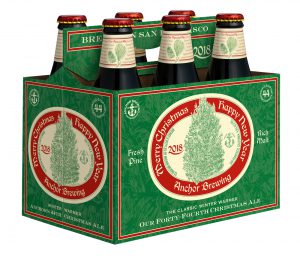 Anchor Christmas Ale is the perfect holiday host gift for any beer lover. It is ideal to pour on cozy nights by the fire or at large festive gatherings. “Every year we brew something that friends and family can enjoy together on Thanksgiving, then Christmas and even New Year’s. Anchor Christmas Ale is at the pinnacle of holiday tradition,” Ungermann shared. Suggested food pairings are roasted turkey, braised root vegetables and sweet potato pie. Many Anchor fans claim that Christmas Ale can be a dessert on its own.

Christmas Ale is available in 6-packs and gold-foiled 50.7 oz. magnum bottles, as well as on draught in select stores, bars, and restaurants including Anchor Public Taps and the Anchor Brewing Taproom in San Francisco. 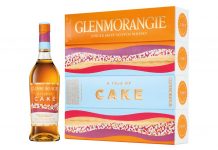 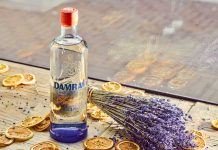 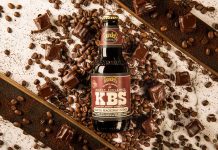