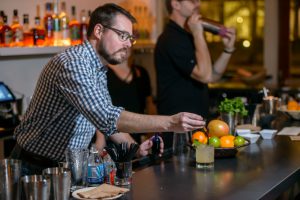 Bartenders, managers, and customers could talk about healthy trends for hours. The tide has shifted towards more “fresh bar” cocktail programs because fresh fruits, veggies, and herbs just taste better.

Hawkins encourages bartenders to stick with the seasons and change accordingly. After all, customers won’t be craving papaya and pineapple in December or such rich flavors as dark chocolate, cinnamon, and nutmeg in July. “Be familiar of when stone fruit season is
or when certain herbs are at their best,” he says. “Strolling your local market and seeing what’s out there is always a fun way to stay on top of what’s in season.”

“I think the bar is finally catching up to the culinary world,” says Ann-Marie Verdi, owner/beverage director of The Bellwether in Studio City, California. “Since our menu changes with the season, they should also enjoy a cocktail that’s in season.” 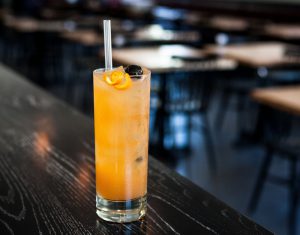 Cox adds that the best way to control inventory is to see what goods are in stock before placing an order. Par adjustments often need to be made weekly based on spending trends. “If I place orders based on how much of a certain product I’m selling, then my program has a better chance of success,” he says. “My goal is to keep my beginning and ending inventories the same. If these criteria are met, then the bar cost will simply be purchases divided by sales.”

West recommends a subtle touch when integrating fresh fruits into cocktail recipe development and execution, as well as getting familiar with culinary knowledge (i.e., how said ingredients are used in food recipes), including such common sense measures as being careful not to cook out the freshness or the life of that ingredient.

“Techniques like muddling, tearing, and vigorous shaking help to bring out the flavor of fresh herbs, fruits, and zests,” says West. “It’s almost as though you have to coax out the flavor of fresh ingredients just before consumption. Our front-of-house team has enlisted the assistance of our chefs, the most readily available food experts, at no additional cost. The guest experience benefits from tie-ins that exist between the cuisine and the cocktails.”

Allen Lancaster, “cocktail artisan” at The Bar at The Spectator Hotel in Charleston, South Carolina, says conventional wisdom dictates that in order to be a bar with fresh ingredients readily available, you have to do volume sales and go through a lot of product. However, being a fresh ingredient-focused bar is an attainable goal as long as a bar manager or bartender does his or her homework.

“Bars that [have it the easiest] are those with fresh juice programs,” says Lancaster. “As a smaller venue, our bar relies on fruits that have a longer shelf life, such as the lemons, oranges, limes, and grapefruits, which we juice daily. We have one item going on the menu for spring, Bee’s Sneeze, which includes edible flowers like micro violas. We do a bi-weekly order of these and keep them refrigerated in a paper towel, helping them last 3-5 days.”

Lancaster says fresh cilantro and mint, based on customer demand, were key components of popular drinks last summer. “We had to order these herbs with a good degree of regularity twice or three times a week as we went through a lot. Bear in mind that if you can’t use enough of a given ingredient or sell a sufficient number of cocktails with that ingredient, you may not want to order it. However, if you can order something two or three times a week and in small quantities, that ingredient will become more viable for your bar.”

For summer 2017, according to Hawkins, cucumbers are the new “mint,” based on customer calls. “I think cucumbers in and of themselves embody fresh, clean, and light. People often look for them; it speaks healthy to them.”

Juan Arboleda, lead mixologist at Maxwell’s Chophouse in New York City’s NoMad, stresses orders should be placed based on what the produce will be used for. He recommends studying the spirits on one’s shelves to determine which spirits pair best with what ingredients. Ford’s Gin with cucumber and mint is one of his favorite pairings.

“If I use the fresh ingredients to make infusions, I can extend the shelf life by quite a bit,” he says. “If I’m using it for muddling in a shake cocktail, then I would have to pay closer attention to the freshness of the ingredient to give them longer life. By blanching mint, it gives me a few more days of life. Storage of ingredients varies by each product. For example, if it’s fresh mint, I will keep it in the walk-in refrigerator with damp towels so it doesn’t dry out on me.”

The Bellwether’s bar program revolves heavily around infused spirits. When creating purees and syrups, the bar’s goal is to capture the flavor of the fresh ingredient at its peak.

“We use fresh fruits, herbs, and peppers to infuse different spirits and create our own unique cocktails, and if there is anything left over from the fresh garnishes, we use them to make fruit juices and flavored waters,” says Verdi. “As the work is put in ahead of time, guests are not waiting ten minutes for that perfectly executed cocktail.”