Home How To Bar Design Bar Tour: The Monarch in Kansas City, Missouri 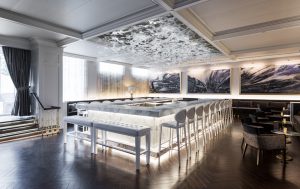 The Monarch Cocktail Bar & Lounge took flight this past August, but the journey to get there was a long one.

The design and build process was much longer than is typical in the bar and restaurant world—one year and nine months. But then again, Architect David Manica isn’t the typical owner. He poured his vision into the bar’s details over a nine-month drawing phase. “Since my office designed it and detailed it, we were able to spend a lot of time in the drawing phase,” says Manica.

Shipping logistics also lengthened the timeline, as many materials were imported—like the white marble for the main bar, which came from Italy. “Those kinds of issues were challenging to work around but we were able to accommodate it,” says Manica.

That time spent on the details translated into a fairly smooth build-out process on the other end.

“It’s been a long project, but the biggest reason for that is we didn’t want to cut any corners,” says Mark Church, General Manager of The Monarch. “If we were going to do this, it was going to be set up so that we’d be successful in the short term but also successful in the long term with how we structured things.”

The first order of business was finding a location, and Manica choose a building in the West Plaza neighborhood of Kansas City, which also gave the bar the opportunity to fill a void—the neighborhood is an entertainment hub with many shopping and dining options but no real cocktail bar options.

The building also checked all the boxes in terms of structural needs. The Monarch features the Main Bar, the private Parlour Room, and an outdoor patio called the Monarch Terrace. Manica’s goal in designing these spaces was to create a social setting that reinvents the idea of a bar.

A large part of that is the main room’s center bar, which lacks one main feature—the back bar. “The idea of pushing a bar up against a wall and having a big wall of liquor and that tried-and-true approach to bar design is something we wanted to rethink and reinvent,” says Manica. “I don’t particularly like bars like that because you end up just facing liquor instead of the room and the people.”

With the back bar absent, nothing obstructs the sight lines, which allows for eye contact from all vantage points. It also puts the bartenders “on stage” as they mix up the drinks. “I think it’s a much more interesting and dynamic way to experience an evening,” says Manica.

All of the liquor bottles are stored in secured display cases in the hallway leading to the Parlour Room and the bathrooms. “We have various ways to display them. Some of them are just simple shelves, some of them are special cases where we can put more expensive bottles and highlight those,” says Manica. “They’re all under special lighting and behind clear glass.”

At the Main Bar, light colors like white, ivory, and soft golds and champagnes combine with warm woods and the marble bar to create an opalescent color scheme that achieves a warm, shimmering aesthetic. An art installation of 1500 monarch butterflies—a nod to the origin of the bar’s name—takes flight above the center bar.

“What’s also really amazing about the space is the light changes throughout the day. So we have daylight during the day in the bar then as night comes and the lights come up, it takes on a different atmosphere,” says Manica. “That was important for me—I wanted the atmosphere of the bar to change.” 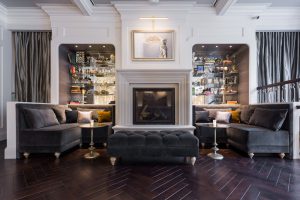 A large, stone fireplace in the Main Bar also helps to give the room the comforts of home. “Getting a fireplace in was one of our biggest challenges,” says Manica. “We specifically brought in a gas line to the space from the city main for the fireplace. Getting the fireplace to pass all the building code regulations and all that was challenging, but we fought for it. I think it will really change and help support this feeling of comfort and sophistication in the room.”

In contrast, the invitation-only Parlour Room features a black-on-black aesthetic. “There’s no natural daylight back there anyway, so we just made it really dark and intimate—the opposite of the Main Bar,” says Manica. “The way those two things sort of counterpoint with each other has been interesting to play with.” 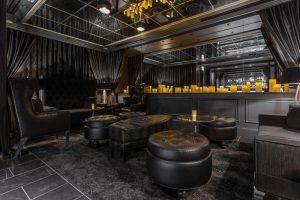 The Parlour Room offers eight cocktails exclusive to the 22-seat room, which are all named after Aesop’s Fables. A curated, rotating list of vintage and rare spirits and fine wines is also available.

The Monarch Terrace offers outdoor seating. Since it’s at the base of a very tall building, Manica first set out to change the scale of the patio. “What you want to do is create a sense of room there, and the room needs a ceiling on it, so we created this canopy that creates that sense of space for the patio itself.”

Operable drapes also help to extend the use of the patio. “On a chilly night, we can draw the drapes, turn on the heaters, and knock that wind off and try to make it more comfortable,” says Manica.

Even the bathrooms feature a thoughtful design. “I think bathroom design is one of the things that is becoming a big trend in restaurant and hospitality design,” says Manica. “So we spent a lot of time in there as well. There’s this beautiful glowing wall of stone glass that’s backlit.”

Speaking of service, with the absence of a back bar at the center bar in the main room, Manica knew he had changed the way his bartenders typically operate. So he worked with them to custom design an under-bar cockpit. 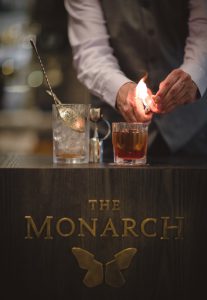 “The plan is to batch the cocktails as much as possible,” explains Brock Schulte, Bar Manager of The Monarch. “Basically where I would normally only have room for one spirits bottle, I’m putting four smaller bottles behind the bar and then I’m training my bar back staff just to keep those topped off and move them in and out as much as possible as we need.”

The Monarch’s bar program (led by Schulte and Church of Liquid Minded Concepts) takes the migration of the Monarch butterfly, which can travel up to 2,500 miles in a season, as its inspiration. “For us, it was identifying these paths that we could take inspiration from and then finding regional flavors and spirits that complimented those paths to create a drink around,” says Schulte.

Bottled cocktails will also be served, and they include Seveneves, which is a mix of Crown Royal Rye, barrel-aged RC cola reduction, and vanilla-infused Cocci Dopo Teatro. “That one is served in prohibition prescription bottles that we seal with wax and then it’s just poured over a cube,” says Schulte.

Another unique feature of The Monarch is the bar cart in the Main Bar area, which is used to bring a bartender to guests. Bartenders craft cocktails tableside from a cart outfitted with six Negroni variations. “We wanted to hit as many palettes as we could using the Negroni as a model,” says Schulte.

The variations include The Monarch Negroni, which is a layered interpretation of the cocktail that features multiple gins, vermouths, and bitter components homogenized with toasted Alder wood. 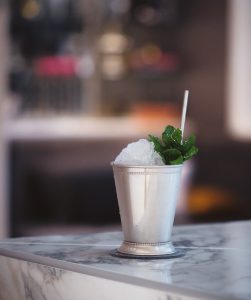 Snacks, skewers, desserts, and small plates made by Chef Theresia Ota are also available, which are meant to complement the cocktails.

“We hope that the guests notice the culmination of our efforts,” says Church, “and that we really have tried to pay attention to every detail when it comes to the serving of drinks and the service.” 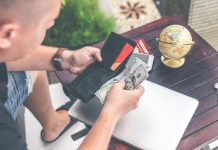 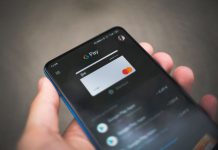 Contactless in the Age of COVID-19 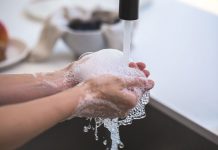