It’s time to rethink projectors. In the last few years, projection technology has greatly advanced, which has allowed for a new world of application possibilities.

“Laser technology has really reinvigorated the space in terms of less maintenance and general higher quality projection,” says Ramzi Shakra, Product Manager, Large Venue Projectors, Epson. “With laser being the light source instead of a lamp, you get incredible brightness and outstanding image quality. And you can set the projector in such a way where you can get consistent brightness over the life of the projector. So, it’s really worth looking at the latest laser projectors and what they can do.”

While projection technology has advanced, it doesn’t necessarily mean that installing or operating the projector has become more difficult. Depending on the application, projector installation should be straightforward. “You have to be thoughtful of where you’re going to mount the projector to achieve the size of image you want,” says Shakra. “But because projectors have zoom lenses, and they can shift the entire image up, down, and sideways, you have a good amount of latitude on placement in your space.” For even wider projector placement latitude, interchangeable lens projectors are a great option.

Epson offers a variety of projectors, including the powerful and bright Pro-L series, featuring up to 11 optional lenses and 3LCD technology that utilizes three chips to provide high color accuracy and equal white and color brightness. Epson also recently introduced LightScene, which is ideal for creating visual displays and immersive environments.

Thanks to more robust capabilities and features, projectors should be considered for more than just showing a sporting event on a large screen. Projectors can be used for creative, immersive experiences as well as pragmatic applications and optimizing space that’s not being utilized. “Something as pragmatic as a menu, bathroom signs, projecting on the floor to help guide people a certain way,” says Remi Del Mar, Senior Product Manager, Visual Displays, Epson.

Projectors also do a better job at grabbing and keeping your customers’ attention. “People are looking at their phone, which is a screen. They go home and look at their TV, which is a screen. They go to sports bars, there are screens. They almost don’t see the screens anymore,” says Shakra. “But if they see projection on a curved surface, or projection onto a 3D object, suddenly they’re really paying attention.”

In addition, projectors allow bars to keep the integrity of their design and space intact when they’re not in use. “You can think of flat panels and LED walls as added furniture to the space,” says Shakra. “While projection actually augments the space. You can turn off the projected image, and then your space goes back to the way it was before.”

That’s not to say that flat panels or LED displays don’t have their place, especially in practical applications. “It’s not necessarily about using a flat panel or projector, but how they can complement each other,” says Del Mar. “A flat panel can still do what it does best, which is provide information in a cost-effective way.”

Where projectors really “shine” is in creative applications. “You have cross-over to artistic space design and creating an ambience or mood setting that’s on the creative side of things,” says Del Mar.

Bars and restaurants are now using projectors to do everything from educate guests through projected displays/information to using projected images for an immersive and interactive dining experience. “As you swing the pendulum toward creating these unique experiences—optimizing spaces for example, tabletops, fabric, floors—this dynamic aspect of projection is very unique,” says Del Mar. “You can’t do that with any other technology today.” 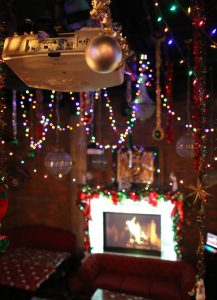 Thanks to these capabilities, projectors are uniquely positioned to meet the demands of today’s consumers. Del Mar cited the idea of the “Experience Economy,” which says that in the next economy, businesses must provide a memorable event or experience for customers. The memory of the time spent becomes the product—the “experience.”

Bars are already experiencing this now, especially with millennial customers, who search for an experience above all else when they go out.

Banko Cantina, a Mexican restaurant and tequila bar in West Palm Beach, Florida, understands the importance of cultivating an experience for its patrons.

The bar/restaurant stretches across three floors in a 1921 landmark building that was the former home of the American National Bank. On the first floor is an authentic Mexican restaurant, on the second is a lounge with dancing, and on the third floor is a rooftop bar with a DJ and a dance floor.

When Owner Tom Murray took over the establishment in 2018, the second and third floor lounge and rooftop bar were doing well, but he was looking to do something that would bring more attention to the Mexican restaurant on the first floor. Hailing from Chicago, Murray remembered the way bars in the city would go over the top with their holiday decorations, and he decided to do something similar with Banko Cantina.

He contacted The Event Group, which has experience decorating large-scale organizations, and the company brought in The Electric Dream Machine and Jasper Mosher to plan out some projection mapping for the space.

Murray gave The Electric Dream Machine the creative freedom to design and create what they thought would look best in the space. Mosher walked around the venue and chose artwork and existing structures to animate. “One of the great things about Banko is how much unique artwork is already painted throughout the venue,” says Mosher, Co-Founder of The Electric Dream Machine. “Existing structures and artwork are our favorite mediums to work with. Our process can leave a building, sculpture, or painting looking like a cartoon misplaced into a real life setting. This effect is so impactful that you just want to reach out and touch it to see if what you’re experiencing is real.”

Together with a variety of real, tangible Christmas decorations, the projection mapping included images of elves and Christmas scenes on the windows, a roaring fireplace on a wall, and a painting of a woman that was brought to life with moving eyes and various Christmas imagery projected around her.

Once the inside was complete, Mosher thought the outside needed some projection mapping as well. Murray loved the idea, so they mapped it out. “There was an abandoned building across the street that had the perfect empty window space to put the projectors in,” says Mosher.

The projection mapping on the outside includes images of falling snow, colorful backgrounds, and elves in the windows. 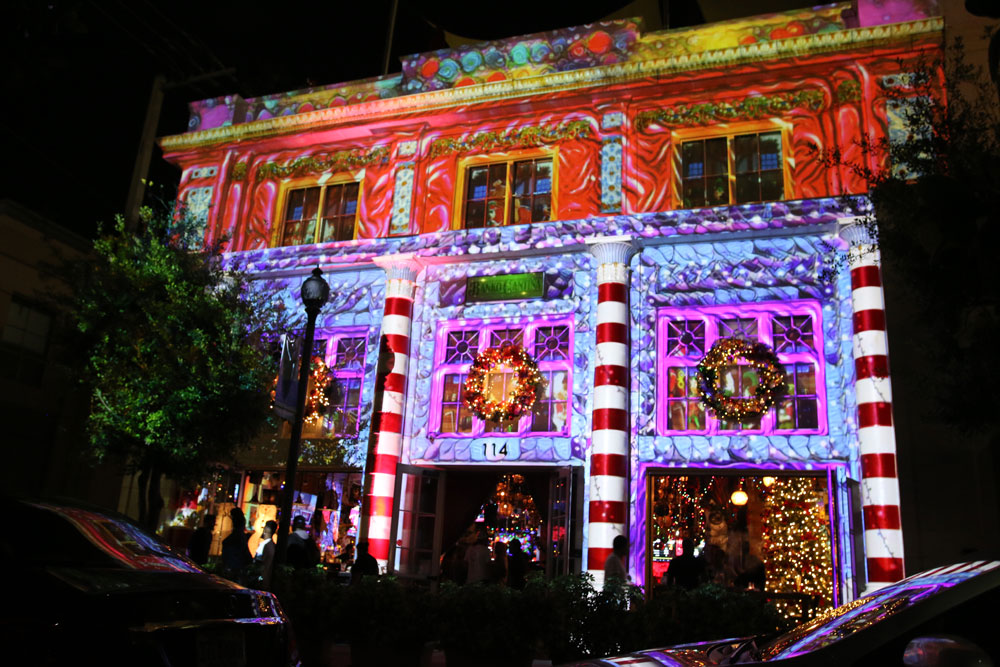 Banko Cantina has also used projection mapping to transform the bar for holidays like Halloween and St. Patrick’s Day.

For this past 2019 holiday season, Murray wanted to go even bigger. “We like to keep our core stuff and add on different things every year,” says Murray. “Our goal is to try to build it and every year create a better product.”

In 2018, the content ran for about three to four weeks. In 2019, it was extended to just over seven weeks. “With permanent installations or situations like Banko Cantina where everything is going to be up for five or six weeks, we can really justify digging in and putting the time into the content creation because it’s not going anywhere,” says Mosher.

For the 2019 install, The Electric Dream Machine reused the indoor and outdoor content from the previous year and added on new effects and content. “One of the new projects inside was a painting of a woman that we were able to bring to life with our self-crafted animation techniques. We digitally painted textures on her skin, made her hair blow in the wind, inserted colorful backgrounds, and added a ‘sugar layer’ of different magical effects on top of the entire composition,” says Mosher. “The second addition was a section behind the bar where 53 golden skulls had previously been fastened to the wall. We took the time to paint and attach 106 ping-pong balls as eyeballs. We then used the Resolume software to projection map a different set of eyeballs to look around independently on each one of the skulls and added Santa hats for some additional Christmas flare. 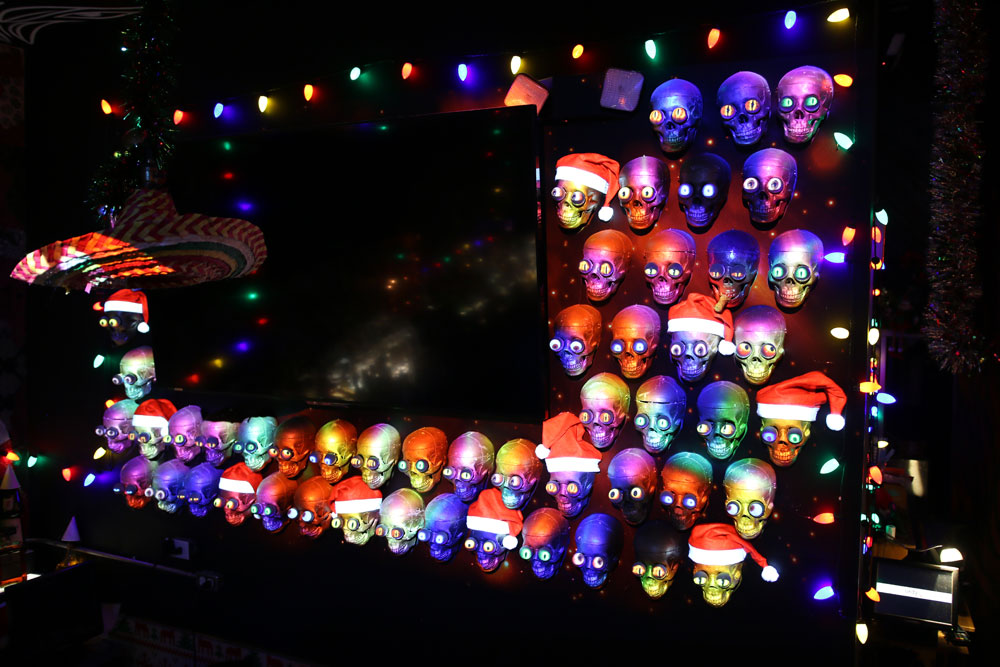 “The idea is to compliment the original feel of the venue before sprinkling on the holiday effects.”

The Electric Dream Machine used a total of eight different Epson projectors at the venue, ranging from a 4000-lumen short throw all the way up to a 15,000-lumen laser. “This was the first opportunity we’ve had to play with the 15K laser projector, and the results were amazing,” says Mosher.

For 2019, Banko Cantina also had visits from Santa and even rolled out a special Christmas cocktail menu.

Over the last two years, the projection mapping has led to more exposure for the restaurant on the first floor. “It increased my fall traffic tremendously from the year before,” says Murray. “Now they realize, because we’ve got them in our doors, that it’s a restaurant, and they really enjoy the food.”

“It’s a great way to pull attention to the establishment,” says Mosher. “It just really makes it stand out from all the others.”