Sailor Jerry Spiced Rum, created in honor of Norman “Sailor Jerry” Collins, the undisputed father of old school tattooing, announces the next phase of its Sailor Jerry Presents platform with the launch of the Sailor Jerry Record Label and the release of a limited edition vinyl record featuring the single “All Sewn Up” by Lucero. The announcement comes today in celebration of what would have been Norman Collins’ 105th birthday.

Norman “Sailor Jerry” Collins, known for his unapologetic attitude and all-American values, was a sailor, musician, radio host, biker, and more. Following his time in the U.S. Navy, Collins made his home in Hawaii and opened the tattoo parlor where he showcased the innovative craftsmanship and artistry that made him famous. Sailor Jerry Presents began as a nod to Collins and how he lived life valuing individual expressionism and creativity by supporting likeminded artists on their national music tours. The Sailor Jerry Record Label now takes this platform to the next level by showcasing music the old school way – through vinyl releases.

On the heels of a successful tour that traveled to over 40 cities across the United States, the Sailor Jerry Record Label’s first release will be of Lucero’s “All Sewn Up”, a never heard before single. The vinyl records will be available in limited edition quantities in 2016 for fans of both Lucero and Sailor Jerry Spiced Rum to enjoy.

“Sailor Jerry Spiced Rum, inspired by the man it’s named after, has a long history of supporting creative individuals who feel passionate about their crafts, and this is especially true for the music industry,” says Josh Hayes, Sailor Jerry Spiced Rum’s Senior Brand Manager. “It was musicians and rockers that helped put Sailor Jerry Spiced Rum on the map by wearing our t-shirts, playing sets in the original Philadelphia store, and calling out Sailor Jerry at their shows. We’ve been able to reciprocate this support by providing a stage for musicians to showcase their creativity and art as part of the Sailor Jerry Presents platform. True to the old school style of Norman Collins, we are releasing the ‘All Sewn Up’ single by Lucero as a vinyl record.”

The Sailor Jerry Record Label will continue to provide a platform for musicians who share the authentic, traditional values of Norman Collins and the craftsmanship he valued. The first single will be released this spring. 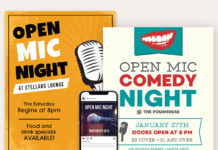 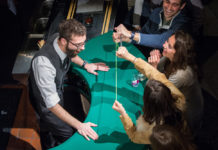 Is Your Bar Offering Guests an Experience?