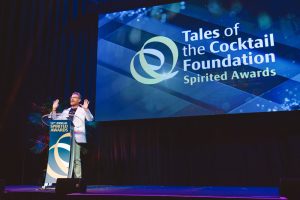 Tales of the Cocktail Foundation (TOTCF) is honored to debut this year’s Top 4 Finalists for the 14th annual Spirited Awards ®. Founded in 2007, the Spirited Awards celebrate beverage professionals, products, and establishments across every facet of the global
spirits and cocktail community. The award categories spotlight a range of talent from bartenders, journalists, and brand ambassadors, to brands and media, to ensure each aspect of the industry is well represented and recognized for its contributions.

This year the Foundation and its Co-Chairs have made some changes to champion this community more thoughtfully. The Best Bar Mentor category was expanded in order to recognize additional mentors worldwide who continue to nurture and inspire others. Previously, one mentor was selected annually, and now there are American and International recipients. Further, the Pioneer Award (which since its inception in 2012 has lived within the annual “Dame Hall of Fame,” program) has now been folded into the Spirited Awards. This decision was made in order to amplify the accomplishments of individuals who have made unique and lasting contributions to the accessibility and intersectionality of the global drinks community over their careers. Additionally, the “Philanthropy Award,” which was first introduced as a single award in 2019, will be used as a platform to highlight examples of the altruistic work that so many organizations and individuals are undertaking in the wake of the COVID-19 global health crisis.

After much consideration and discussion with the Spirited Awards Committee, the Foundation has made the decision to update its policy around repeat winners. Its goal in doing so is to acknowledge that past Spirited Award winners have received honor and recognition for their achievements, and the Foundation wants to ensure that others who have not yet had this recognition have the opportunity to be awarded for their work in 2019 and beyond. This policy went into effect after this year’s Top 10 announcement, which means that this year’s Top 10 nominees who had previously won the category they were again nominated for were determined ineligible for the Top Four Finalist list. Moreover, moving forward, if a bar has previously won “ World’s Best Bar ,” they are no longer eligible to win another Spirited Award, except for “ Timeless ” or “ Philanthropy ” (which are selected through a different set of criteria).

These new rules affected a handful of Top 10 nominees this year. As such, the Spirited Awards judges had to re-cast their votes for those categories in order to determine the new Top 4 Finalists. Mandating this change in the middle of the judging process was not easy. The Foundation believes it is imperative to ensure the Spirited Awards process is more transparent, equitable and fair. In the coming months, the Foundation will announce additional changes to the submission and judging process, designed to make the Spirited Awards more inclusive and accessible for all.

“For many months now, we debated whether an awards ceremony is what the world needs right now,” shared Caroline Rosen, President of Tales of the Cocktail Foundation. “Ultimately, we decided yes, we do need to continue to celebrate the resilience of our peers. Doubling down on philanthropic recognition and introducing categories that more accurately depict the range of voices contributing to the progress of our industry in meaningful ways — these are just a few of many steps forward we’re looking to make as an
organization. Changing policies mid-awards cycle and recasting votes was a very difficult decision that we do not take lightly, but our hope is that it will create a more equitable and fair structure for all nominees.”

For the first time in history, the Spirited Awards will exist in an entirely digital format with a robust Digital Playbill spotlighting changes to this year’s awards, information on the nominees and insight into the process employed by Spirited Awards Co-Chairs. TOTCF will leverage its social media and digital platforms to celebrate global excellence. This will occur in two phases: a September 21 rollout of specific category winners via Tales’ website and a pre-recorded digital ceremony for select categories on September 24 (categories and dates denoted below). Given the volume of categories, spreading winner announcements out over the course of the Tales of the Cocktail ® 2020 week will enable the organization to more thoroughly spotlight the winners and their work on the organization’s channels.

The Raise a Glass: 2020 Spirited Awards Preshow will be hosted on September 24th at 3pm CST and the awards presentation will begin at 4pm CST. For more information, visit www.talesofthecocktail.org.

● “Mixopedia: Under Foot” by Wayne Curtis for Imbibe
● “JaNee: Where is She Now” by Aaron Goldfarb for PUNCH
● “Can There Be Terroir in Spirits?” by Kara Newman for Wine Enthusiast
● “The Case for Drinking Scotch in Tiki Cocktails” by Becky Paskin for The Daily Beast

● Cocktails with a Twist by Kara Newman
● The NoMad Cocktail Book by Leo Robitschek
● The Martini Cocktail: A Meditation on the World’s Greatest Drink, with Recipes by Robert Simonson
● Minimalist Tiki: A Cocktail Wonk Look at Classic Libations and the Modern Tiki Vanguard by Matt Pietrek and Carrie Smith

Best New Book on Drinks Culture, History or Spirits presented by Tales of the Cocktail Foundation
Winner announced on September 21

● Drunk in China: Baijiu and the World’s Oldest Drinking Culture by Derek Sandhaus
● Last Call: Bartenders on Their Final Drink and the Wisdom and Rituals of Closing Time by Brad Thomas Parsons
● Understanding Spirits: Explaining Style and Quality by Wine & Spirit Education Trust (WSET)
● Spirits, Sugar, Water, Bitters: How the Cocktail Conquered the World by Derek Brown and Robert Yule

Timeless International Award presented by Tales of the Cocktail Foundation

* By the time of the Awards, some bars may have closed temporarily or permanently in the wake of the pandemic. Some individuals listed might be furloughed or laid off at the time of the Awards, changing their bar or brand affiliation. The Spirited Awards assess the body of work from the year prior and represents how the individuals, establishments and brands were originally nominated.

“In this very difficult time in the global industry, it is some rare good news to be able to celebrate the hard work of bartenders and bars around the world,” said Jacob Briars, Spirited Awards International Chair. “My hope is that the Awards this year shine a light on this amazing, resilient community, as well as inspiring the public to visit these great nominees.”

“The Spirited Awards not only unite hospitality at a time when we need it the most, they have allowed us to shine a bright light on the talent, passion and dedication of more incredible parts of the world. Although we may not be able to visit many of these vibrant establishments at the moment, the Awards are a reminder that no matter the distance, we are all united through a love of people, culture, food and drink,” shared Latin American & Carribean Spirited Awards Co-Chair Camille Austin.

JUDGES:
Spirited Awards judges are a collection of respected bartenders, bar owners, educators and writers from across the globe entrusted with this critical calling. Drawing on their years of experience and their knowledge of the current work being done locally, nationally and internationally, together the judges can evaluate nominees from far and wide to ensure that the Spirited Awards represents the breadth and diversity of the global drinks industry. Over the past year, Tales of the Cocktail Foundation worked with the regional chairs to ensure this year’s judging panel would be more geographically diverse and focused on recruiting more judges from mid-sized markets to better represent the range of the industry on a global scale. This is especially evident in the addition of three new Writing & Media Co-Chairs who span the globe for 2020. The Spirited Awards® are not based on popular vote and all nominations will be evaluated by their respective judging committees.